They both raced to the velvet chaise next to their parent’s bed. "Goodnight girls. Sweet dreams." Daddy had taken them outside and covered them for the night. It felt like the North Pole. Bitter cold winds swept around the house and the temperature took a dive into something Californians typically only see in fancy, French-doored Sub-Zero refrigerators—something resembling popsicles.
Getting comfortable when it's cold is generally difficult for Chihuahuas. They aren't used to cold weather and even with pink sweaters, their ears and toes feel icy.

"Move over or I'm telling Mom!" Pinky whined. “Tomorrow’s Christmas and we have to be good!”
"Bah humbug," Fiona mumbled, as she sprawled her matchstick legs behind her as far as they would go. A complete and utter Scrooge, her adorable face and diminutive physique didn’t automatically make her sweet. “All you ever want are treats and more treats,” she said with a haughty tone. “The only reason you want to be good is so you can get more snacks. Will you ever stop being a slob?”
"For an itty-bitty thing you sure are nasty!” Pinky made a sad face, accidentally pulling part of the covers off Fiona.
"You are a moron. Why don’t you shut up or grow up? For goodness sake, aren’t you like seventy-seven in human years?" Fiona grunted. "Go to sleep and leave me alone.” She buried her face into the soft comforter and closed her eyes.
After a long day of home inspections, kitchen floor cleanups and all around holiday excitement, Pinky was tired too. Outweighing Fiona by at least fifteen pounds wasn't enough to give Pinky the upper hand. In fact, Fiona was in charge of everything and it wasn't fair.
Using her nose, she pushed Fiona's skinny legs aside and plopped onto the green chaise. A few minutes later, the tinier Chihuahua re-positioned herself under the covers. Pinky didn't want to complain but a small growl attracted Mommy who came to make sure they were properly covered. First, she wanted to take a peek at her two naughty pups. To her delight, she found Fiona's head resting on Pinky's patient haunches.


“Aren’t you two the cutest? Merry Christmas,” she whispered. We’ll have sleighs full of fun tomorrow. After turning off the light, she listened to the wind howling in the yard and wondered whether it might snow. And as the light of the full moon crept under the window shades, she thanked God for all her blessings--even the furry, four-legged ones--now sleeping like angels....
Posted by Intangible Hearts at 12:56 PM 8 comments:

There's Room in My Heart

There’s room in my heart to wish you and yours a wonderful Christmas and a Happy New Year. There’s also room for cheerful thoughts--towards those who don’t celebrate Christmas--for contentment and joy and of course--a lovely and safe 2016! 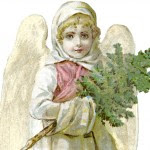 There’s room in my heart. Quite a bit actually—it’s like a giant airplane hangar waiting for kindness to enter. It’s a place to dance and sing about good things, whine and cry about the bad and toast the hopes and dreams of a coming year while sharing our stories. The ceiling is high in my heart. Breezy and light with room for many angels, I put my closest allies, my dearest friends on ornate pedestals and in my imagination, I think of them at a giant award ceremony receiving the highest honor my heart can bestow.

There’s room in my heart for good tidings and lactose free eggnog—giggles and excitement. I can decorate with strings of twinkling lights or hire a nice old man to set up a train set, such as the one I had as a kid. Then, when we’re getting tired of celebrating and singing Christmas carols, we can sit on satin pillows around the tree, praying for peace.

May God Bless You All!
Posted by Intangible Hearts at 12:11 PM 11 comments:

Three Ways To Add Time into Your Life Right Now!

While shopping and running errands, you’ve probably noticed that time seems to slip by faster than a cheetah on speed. Of course, I have no experience with crack or cheetahs but since wildlife and opium plants might mingle, there could be a weird chance something like that could develop. Somewhere near a leaking power plant or near a nuclear testing site—but I digress. What I want to do is offer a suggestion about making time slow again. Women who have given birth know the drill. They could write this post too because expecting is exactly that—the expectation of a new life with nine months of built in anticipation, anxiousness and of course pain. Unfortunately, I wouldn’t really know that either but I’ve heard great stories from wonderful mothers.
The rest of us might recall waiting for Christmas or maybe we waited in the rain for a bus and thought it would never show up. Here are three great ways to add some make believe but still valuable, time into your already busy week.
1.     Create a small goal with a surprise at the end.
Pages or Pounds?
With writing, it’s pages, or with dieting it’s pounds. There’s a number involved and they sound similar. 1500 calories or 1500 words a day. Set a goal but make it attainable. At the end of the week if you’ve reached your goals you can reward yourself; but only at the end of the week. Rewards have to be something you don’t indulge in frequently such as a special slice of cake or tickets to a theater. The trick is to look forward to the reward and the week will crawl by like a naked turtle looking for her shell.
2.     Make a date to go somewhere fun
Weekend Trip or Vacation?
You’ve always wanted to go to Universal Studios? Hawaii? Well this might be a great time to plan a trip--something stellar- and rockin’ fun-- such as a New Year cruise or maybe a weekend trip to Vegas? The anticipation will drive you batty because it’s something you’ve

wanted to do for a very long time. Once you book the tickets, it will seem like you’re back in third grade waiting for recess. Time will return to you in spades. The clock will tick louder than usual. It will seem you’ll never get there and it will be so worth it when you do.

3.     Plan a party a month in advance
Be a Guest or Hostess
It’s still almost a month out but planning a New Year Party will be a cinch. It’s not the planning but the space between the minute you start planning and the actual event that seems to create the slowness of time. If you know of a spectacular party you want to attend then make sure you’re on the list. Getting married in the New Year? Congrats but the minutes will seem eternal.  Even being a guest at upcoming nuptials can be exciting. The farther off the event and the more elaborate the gala, the more you’ll see clocks stopping and minutes crawling like slugs into your garden.
The Present of Time

So there you are: My intangible gift to you—a few scattered minutes to cherish and hold until something wonderful happens—and you inhale before you go screaming and laughing through Times Square on New Year’s Eve or exhale cold vapor while riding a roller-coaster at a local amusement park. Before the kisses and hugs, before the spilled champagne and before opening packages under the tree; as this calendar year draws to an end, I want to wish all my family members, friends and followers a wonderful holiday and Happy New Year!
Posted by Intangible Hearts at 11:13 AM 5 comments: