Connecting With a Brilliant Author!

Connections. Isn’t that the entire reason for the Internet and all the various, social media sites?


Here's a bizarre tale of a tale:
The other day, we had a new LED bulb that went dark in the kitchen. I got on a chair with a wooden spoon and pushed the bulb, gently towards the ceiling, a tiny bit. It had lost its connection. When we flipped the switch on the wall, the bulb lit up like magic.

Oddly, this was a precursor to a special connection I was about to make that very same day!

You see, I have read a few books by my friend author Barbara Roman, but never thought I'd be lucky enough to meet her in person. I love reading many different types of books, but somehow, I’m especially drawn to fantasy and fairy-tales. Her spiritual stories captured my heart.

So, imagine my curious feeling about the light-bulb in the kitchen, when I know I’m about to meet an author who wrote a mystical, children’s book about how people are similar to different types of light-bulbs! Yes! A light-bulb went off in my brain, that seemed to say,"Try to listen, Eve. You might learn something."

Last week, I had the amazing opportunity of making a human connection because of technological advances that were not possible even twenty years ago. And, after the light-bulb in my kitchen incident, I realized it’s an important, one-of-a-kind connection.

1. Tell us the name you write your books under and give us an easy way— or a clue perhaps—a type of memory hint-- that will help us always remember your name or the name of one of your books.

Hi, Eve.  Thank you for the opportunity to be featured on your Blog page.

I write under two names:  I use B. Roman for my novels (The Moon Singer Series and my suspense thriller “Whatever Became of Sin?”) - somehow I thought just using a first initial wouldn’t influence a reader’s bias about it being from a male or female author and let the story speak for itself.

For my children’s books I use the full Barbara Roman.  I felt it was softer and more approachable than just a first initial.  My children’s books definitely have a “feminine voice” so I wanted my name to be an indicator of a softer style.

That said, I could be completely wrong and am just confusing my readers!  Ha.

2. Tell us something that no one knows about you.

Like many writers my background is somewhat eclectic.  I’ve been a professional singer since my teen years (eons!) and my “jobs” have been in journalism, marketing, promotion and feature writing for newspapers and magazines.  All of this intertwined with writing about music, then into children’s stories, then novels.

I love all kinds of movies except horror and slasher/hacker violent films.  My television addictions are medical shows (Saving Hope, New Amsterdam, The Resident); and legal dramas (For The People), and political shows such as Madam Secretary  and Designated Survivor.  And just for contrast would you believe I was completely obsessed with the fantasy TV series Smallville?  Loved it.

3. What are your favorite genres to read? Favorites to write?

My reading tastes swing wide, when I have the time to read, which is very limited.  But I am especially drawn to legal thrillers, and have read a lot of spiritual and metaphysical books that are self-empowering.  These preferences are evident in the books I have written.

4. What are you working on right now?

My work-in-progress is another suspense thriller called “A Man’s Face.”  I have a lot of work to do on it but here’s a little teaser:
A teenager walks in on his mother’s murder but now, 15 years later, can still only remember the scarred face of a man standing over her body. Through many plot twists and turns he discovers that the man he saw is his fiance's brother. Worse still, his fiance's father is the actual murderer - the brother had covered up the crime.  It’s a multi-generational saga of treachery and corruption set in the backdrop of the elite wine industry from Spain to California.

Wow, "A Man's Face," sounds like it's in the vein of your suspenseful novel, "Whatever Became of Sin".
Well, anyway, thanks so much for meeting me, Barbara.  You, and your books are wonderful. I'm so glad we made this connection.

5. You can buy her books by going to these links:

Update: While in the kitchen for lunch, before finishing this post,
the same exact bulb flickered. Coincidence?
How about you? Have you met any of your online friends?


I’ve heard stories about how the crocus flower peeps through the snow.
Daffodil bulbs with an innate desire to grow.
Tulips that thrived in the cold,
withering when shipped to be sold.
I’ve read Eliot’s poem about April being cruel,
especially noting the price of fuel.
I see the icy highways on the news,
wild seas and the unpleasant cruise.
Watched our petals take to the sky,
like butterflies waving a brief goodbye.
Though things seem bleak,
the way many speak,
we cannot mope.
We must understand this visual depiction of hope.
The promising end to winter storms,
as a time to be reborn.
Easter-time. 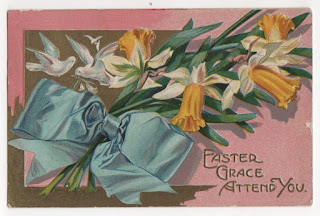