A life force and spiritual awakening flutters in early fall,
lifting us like withering petals
behind eyes into the sky.
Preparing us for winter,
offering assurance,
to enter next year with renewed hope.

Today we totter on parched grass,
an embarrassing crunch follows our footsteps.
Soon torrential rains may fill crevices
of a seasonal palette--
clogging drains with drops
of mixed hues consisting
of jade and auburn leaves--
swirling around with globules of burnished umber--
highlighted with antique gold.


We eagerly anticipate the unveiling.

Are the colors changing around you too?
Posted by Intangible Hearts at 7:13 PM 6 comments: 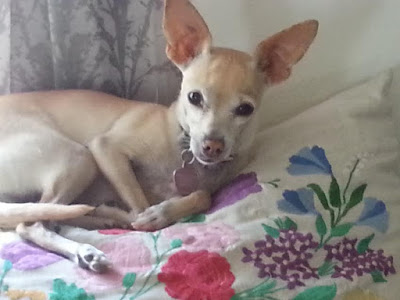 Down South in sunny California
Lives a princess with oodles of attitude,
part Chihuahua, part muse, her name: Fiona.
It’s absolutely no secret she prefers going nude.
Forget the fancy collars the frou-frou clothes
disgusted by training snacks, expensive toys.
Cute as a fawn from head to her toes,
Her ears take in every single noise.
To top it off she’s rather stuck up--
Ceremoniously carry her downstairs ala palanquin,
Unlike most dogs, hardly a pup,
Cuddle too hard, she bursts into fits.
Too many kisses make her want to flee.
Upon hand-embroidered European pillows she sits,
Like a Monarch with a pedigree--


Until it’s time to pee.

Posted by Intangible Hearts at 10:18 AM 9 comments:

The Basics of Our Intangible Hearts

In case someone is wondering what this blog is about:

What is an intangible heart?

1.       It is the non-cardiovascular, metaphysical heart connecting all of us.

2.       It is an ageless feeling of warmth, security and shared laughter.

3.       It is the knowledge you’re in the company of friends. Mutual acceptance.

6.       It binds together(such as a community or religion)
but can free the unwilling, those wanting release....

9.       It is energetic and filled with starlight, reflecting into the heavens.

10.   It is the eternal voice of reason and a piece-perhaps sacred-
-of God lingering within-- it never dies.

These are just the obvious ones--can you think of a few more?
Posted by Intangible Hearts at 9:59 AM 7 comments:

When we moved to our new home I felt fortunate to have a view of Mount Palomar, in San Diego. I’ve always enjoyed looking out at the mountains, dreaming of those elusive possibilities that are right over the horizon. Unfortunately, the builder of these homes decided on buying the flood zone next to us and he fenced us in with big cement blocks, developing a rather close-knit community right next door. Though I’m sad, I’m not completely disheartened. As a person who spent most of her life looking at those potentialities and trying to help others, I believe there’s a reason I’m supposed to reflect and look within right now. Ironically, I don’t have a choice in the matter and being ‘forced’ into thinking about life reminds me of studying for finals in school. No more sunrises over the mountain and no more views-- this is real folks and it feels serious.

Inside all of us are endless horizons and in my case, perhaps I’ve crossed so many mountains (literally by hiking or moving as well as figuratively), landing in so many valleys that I may have missed something along the way. (Knowing my attention span, this is highly possible.) Though I love reading books by talented authors and enjoy spiritual and religious verses, maybe it's time to search inside my own soul. And though I’ve always been a fan of prayer, there is much more I need to figure out.

Our ugly wall--that will eventually be hidden behind green anyway—(greener still--after the drought)--appears to be a coincidental factor--coupled with a gentle dose of transcendent serendipity. I’ll take it as a sign to pray and meditate prior to writing, because maybe I’ll find my answers, deep inside. More importantly,  it’s time to stop dreaming about all those countless options. I’ve had years of doing that. It’s time to collect my thoughts, throw the dice and take a chance on my personal skill-set. Hmmm, let me contemplate on that for a while; here behind our castle wall.

Does it all sound like part of a plan?
Can anyone relate and does this make sense to you?

Posted by Intangible Hearts at 10:26 AM 8 comments:

(Southern California)Two female candidates recently announced their candidacy and are running for President on a special third party ticket called the Sniffocrats. With so many on the Ruffandfluffican ticket they decided on veering into un-soiled territory where the law of the land begins with dog-walking and ends with treats.
By entering the race, they have found a great deal of support among certain groups including: most dog bloggers, animal rights activists, meat packers, pet store owners, puppy obedience trainers, groomers, flea shampoo manufacturers, K9 officers, drug sniffing dogs, guide dogs and anonymous cat haters.
That's a large, formidable group of voters!
With a proud Hispanic heritage and natural cuteness, these very American Chihuahuas are sure to win the race.
Keep your eyes on Pinky and Fiona and watch their pawl numbers rise in the coming months! 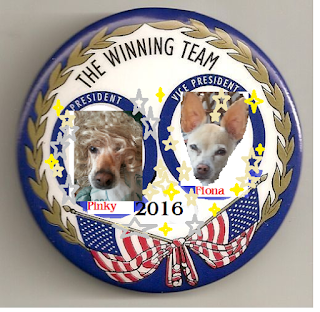 Posted by Intangible Hearts at 9:20 AM 8 comments:

Your Comments are Dope!


My thing is confidence. It swells and ebbs like the tides. Sometimes I’m all braggadocio, full of brazen arrogance with years of experience and a decent vocabulary. Other times I’m knock-kneed and humbled, looking for basic words to express the simplest ideas and emotions. At my age, this isn’t fun because it feels like I’m sitting on a roller-coaster waiting for the scary part to take over or the fun part to make me forget about the scary part. I’ve figured out the things in my childhood that made me who I am and I’ve read lots of self-help books to help me overcome my insecurities. Still, I think it’s painful as all heck when progress seems slow and rejection emails lollygag around my trash folder.


Creative writing is, and has been, my specialty ever since my friend Dave made me business cards in high school. Before the internet, before email, before social media, there I was with my Underwood typewriter plunking out stories and heartfelt poems. Bottles of whiteout slathered all over the place, I even had actual friends and a few publishers that found what I wrote mildly interesting. That was over 30 years ago and I'm surprised and unhappy to inform you--age doesn't automatically cure this problem. Whether you’re an actual friend—or not-- most of the people who read this blog are genuine, kind people who enjoy creative writing and guess what?
Your positive comments and reviews make my confidence meter rise!

If there’s anything you enjoy about my blog or perhaps you’ve read my stories, poems in anthologies or happened to come across Penniless Hearts, my novel --set in Hawaii—please comment, share or tell your friends. You are the reader and I appreciate everything about you, especially that boost of confidence and the way you make me feel. Thank you!
Posted by Intangible Hearts at 4:20 PM 5 comments: