Five Ridiculous but Slightly Stressful Things to Smile About

With the recent turmoil, the earthquakes and politicos going off the deep end, my heart suggested I keep my thoughts quiet until things get better. Unfortunately, things aren’t lightening up too much—it’s as if Les Miz is playing out on the six o’clock news-- every day. Meanwhile, we have blogs, stories and books to write and someday publish. For some strange reason, the world won’t stop so I can get off and be emotional. Must be why so many have signed up for a one-way ticket to Mars and I keep finding humor in the painfully mundane. Examples:
1.       At the end of the day.—Almost every television personality, interviewer and interviewee uses this transitioning phrase in their dialogue. Last week we went to a real estate conference to learn about house flipping and yes, the speaker kept saying it was the end of the day and obviously, I began to yawn. (And no, we’re not interested in house flipping but I always like to learn things, such as quick ways to find my inner snore.) Meteorologists, Presidential candidates, comedians, talk show hosts, sports announcers—everyone says it! When my doctor said it, I almost flipped out. If you haven’t noticed this unusual trend, you will now. Sorry.

2.       What do you think about that auto commercial indicating in large type that those are real people, not actors? I’m sure they realize how silly that is but it’s starting to bug me, even though I’m aware some actors are aliens.

3.       We love listening to classical radio on the weekends and every Saturday morning the announcer comes on to interview some violin player--or he or she chats about some movie music for hours. Don’t they realize we’re listening to their station for music, not Talk radio? Blah, blah, blah, we switch it off and stream YouTube. Does anyone still listen to the radio?

4.       When we’re in the car and we’re listening to a rock station and a car ad comes on about leasing a car for $199 but right when you think it’s finished, the spokesman continues on a super fast tirade of all the stuff he has to disclose in ten seconds. Of course, he’s reading so fast there’s no way anyone in the world could understand any of it but the car dealer feels he’s covered all his bases. As someone who spent hours writing automotive ad copy for newspapers, I think this might not be honest. Is it just me?

5.       So you pull into the driveway, go inside and decide to pop a frozen pie in the oven. The box actually says, “Remove plastic before baking.” Your hands become fists before you preheat the oven. You control yourself for a few minutes, jump up and down and inhale deeply before your cells divide and you know you’re about to blow a fuse.

At the end of the day, you’re tired of everyone treating you like you’re stupid and you scream at anyone who will listen about how insensitive that frozen food company must be if they have to tell other, senseless people not to cook the plastic wrap with the pie.


But you aren’t senseless, are you? You pay taxes and count your blessings. You're not a victim! Why blame the pie? Breathe, turn on the radio. “You have nothing to fear, nothing to hide!”

(2 minute clip from Les Miserables)
Posted by Intangible Hearts at 10:58 AM 16 comments:

Very few perfumes come close to the sweet fragrance of red roses blooming in your own backyard.
It’s a heady combination of a gift from above blended with gritty soil, hard work and true love. The rain in California helped too. 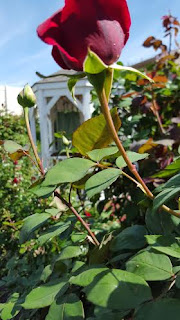 They really exploded this year into a giant infusion of magical, sweet-smelling blooms. Oh and the hard work had nothing to do with me. I’m a writer, not a gardener. I'm grateful for true love.

I think I mentioned, last year we had some ducks that enjoyed hanging out in our yard too and they are back—well kind of—you see there’s a sort of power struggle going on between our rescued dogs and the wild ducks. Pinky weighs between 20 and 25 pounds and most of you have already heard me ramble on about my five pounds of terror- Fiona.

Anyway, these two romantic ducks look like they’re over ten pounds and for the most part everyone has been getting along just fine. (You stay on your side of the yard and we’ll respectfully stay on ours.)

The rose bushes however, are apparently out of bounds, because yesterday when I went out to enjoy the aroma of those roses, Pinky noticed the ducks waddling around underneath the thorny bushes. She dived after the large male.  Feathers fluttered and the canard sans à l’orange,  flew up into the air and beyond the fence. Pinky looked shocked. Her eyes followed the birds into the sky and then she looked over at me. “Yeah,” I said. “Bet you’d like to do something like that-- pretty nifty trick, huh girl?” She wagged her tail and sniffed the ground before looking into the air wondering how something bigger than her frightening little sister could become airborne. Still stunned, her tongue dripped with excitement and her eyes became bottomless pools filled with animated question marks. I laughed and reached to pet the top of her head. “Haven’t you ever seen magic before?” I asked before heading for the house. “We better go inside so the ducks can come back.” A few hours later, they were back. We’ll probably have baby ducklings again this year. Guess they like the scent of roses.

Meanwhile, Fiona wrote this:
Roses are red,
Violets are blue,
Where did the ducks go?


We haven’t a clue.
Posted by Intangible Hearts at 1:11 PM 8 comments:

What I Learned While Volunteering

What I Learned Volunteering in a Migrant Community
Over the course of four years, I spent a few hours a week volunteering at a public school near the Salton Sea, assisting a second grade teacher’s students with reading and pronunciation. It was a lovely drive through fields of green peppers, strawberries, jalapeno bushes and long expanses of date palms. Now that we’ve moved away from the desert, I’m reminiscing about some of the things I miss. And working with adorable children with starry eyes and big dreams is on that list. 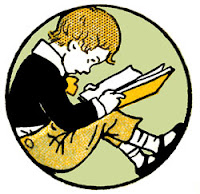 Everyone’s heard that volunteering is rewarding and I have to say without any doubt that it was one of the most rewarding things I’ve done in my life. What about you, have you done some volunteer work? What about these children—what do you think about their future?
Posted by Intangible Hearts at 10:53 AM 10 comments: