RIVERSIDE COUNTY, CALIFORNIA-We are happy to report that since our last post the drought in our usually photogenic state appears to be over! Hooray! The upcoming flowers, grasses and trees love every minute. It’s great weather if you’re a duck or if you don’t drive—but most small dogs-- don’t like it very much. Right now, the grass is soaked and clouds are hovering above promising more rain. The forecast is calling for at least another week of slippery slopes, mudslides and complaining pooches. Time to crank up the heat after making sure there’s a pile of yesterday’s newspapers or maybe a fresh puppy pad in clear sight.
Speaking of dogs, the candidates are circling three times before finding a comfortable spot to sit down. Let’s see if I can ask a question or two as they pass by entering the auditorium.
“Miss Fiona—Miss Fiona—I’m Eve with Intangible Hearts and our viewers had a few questions about the election. Do you think your views on abortion might have influenced some voters?”
“That’s a ridiculous question because my opponent and I are both rescues. Intangible Hearts? Who are you again?”
“I’m Eve with Intangible Hearts which has a division called PNN.”
“Pin? Not sure I’ve heard of you.”
“No, it’s mainstream—Pee-N-N.”
“What about the wall? First, you wanted a fence that you and your friends could dig under and then you changed your mind? What happened?”
“The people have spoken-- the election is over so I don’t think it’s important.” 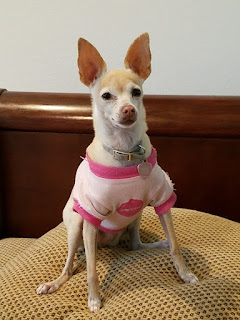 “Do you think wearing pants could have made a difference?” Ears twitching, she turned, yawned and adjusted her pink top.


Noticeably annoyed with my questions, she moved towards the podium to address the crowd. 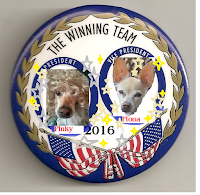 "It was a long night. Everyone thought I was going to win. Everyone—even my competition—but alas I conceded to my opponent after what amounted to a long and arduous sprint for power. In the canine world, I’ll admit there does seem to be a bias regarding size that can bring down a campaign faster than a wiener dog race in a red state. After all, my ass-sniffing- technique is limited to the height of a drought-resistant blade of grass. Plus, unlike the winner, I don’t play games. 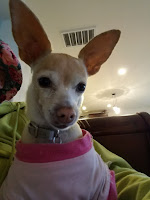 Still, I have to raise my paw in awe. Though the competition was fierce, the snarls louder, we didn’t lower ourselves into a bloody dogfight. My ears were perked and listening to the entire charade. While my opponent groveled for tasty snacks, I had to beg for itsy-bitsy scraps not fit for a mouse. The phony ‘big eye’ technique worked to get them votes while I delivered speech after speech to the mailman, the gardener and anyone else willing to listen.  I take back some of my heated comments about my opponent's stinky butt. I'd take it all back but it's too late.

Of course now that the election is over, I’m not disappointed with the results. Seriously, my constituents are smart—they know loyalty when they see it and now that I’m retiring from politics--, they will hopefully back the winner so I can go back to taking long naps." 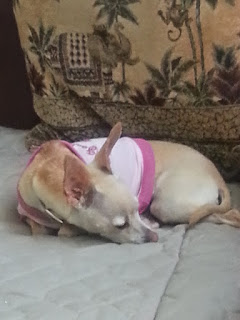