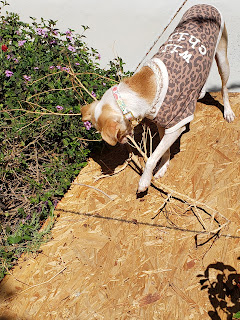 I’ve been calling our live-in rescue, Petunia Butt-Cakes, because she doesn’t like home remodeling. There are contractors setting tile upstairs, which inspires unprovoked barking tantrums. She refuses to learn the outside from the inside, hangs off of puppy pads to do her business, or goes for the larger pads-aka-rugs. She also forages for sticks in the yard, chews on them, which in turn gives her constipation, and that annoying itch under the tail.

Of course, she’s teething, chewing and destroying everything she can, even digging up plants, and turning over lamps. Her numerous toys don’t excite her as much as any form of trouble. You should see what she did with my yarn. And, she shouldn’t have separation anxiety, because we are here, babysitting, and trying to train this 13lbs of terror, with treats, all day long. I turn my back and she’s standing on the dinner table. Still, she doesn’t believe she’s not the Alpha dog. Somehow, she has determined that she can do as she pleases, and it’s none of our business.

Her dad has threatened to send her back to the rescue; even offered to sell her in front of Walmart. I think he was joking, but the scars on his hands just healed. We bought books on training puppies but those people/writers/doctors or whatever they call themselves, are crazy. One book, that ended up in the thrift-store box, suggests a choke-hold leash. Another famous dog guru said to use electrical shock collars. How are famous veterinarian’s able to offer such horrid advice?  In fact, I’m astounded, but I don’t want to dwell on it.

I’m hoping when the floor is finished, things will settle down a bit. Until then, I’m investing in odor eliminators and rolling up the rugs. Someday, I want to write about her sweetness. It happens after dusk. After the workers are gone. After running us ragged, after we threw the ball a hundred times, after the zoomies in the yard, after she’s too pooped to bark anymore, she finally, runs out of energy and wants to snuggle-up while we watch television. Adorable. 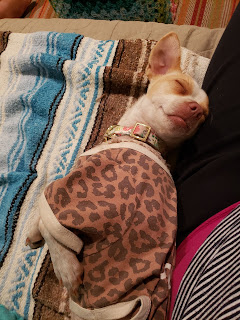 A sleeping monster waiting for the sun to rise on a new day. Our Baba-Chanel, the cutest Jekyll-Hyde character you’ll ever see. Petunia Butt-Cakes.

Posted by Intangible Hearts at 11:16 AM